It was a weekend for Toyota at Richmond Raceway. The NASCAR Cup and Xfinity Series in April have carried the Toyota sponsorship for quite a while. The ToyotaCare 250 already notched the manufacturer with an Xfinity win Saturday as Ty Gibbs grabbed the checkered flag.

The NASCAR Cup Toyota Owners 400 doubled down as Denny Hamlin drove the #11 FedEx Toyota to a Sunday win.

It did not look so obvious at the start. Ryan Blaney in the #12 Penske Ford and William Byron in the Liberty #12 Chevy started out on row 1 with the drop of the green. Blaney held the lead for the stage one win with Byron right there for second.

Blaney started stage two out front but Martin Truex, Jr took over following green flag pit stops. Truex and Christopher Bell traded off but the stage 2 win went to Truex with Bell claiming second. The #19 and #20 of Truex and Bell put Toyota in the spotlight at the stage 2 half way point.

The restart for the final stage put the #19 and the #20 back into running order. A caution brought on by a triple car shot as Cole Custer and Ty Dillon touched which pushed into Austin Cindric. William Byron stays out as others pit for position on the lead at the restart.

Martin Truex, Jr was chasing on the #24 of Byron. As laps ticked by, Truex stayed on the #24 but Kyle Larson, Kevin Harvick and Denny Hamlin were making gains. Hamlin was running fresher tires than the rest and made better time.

At five laps to go Hamlin went by Truex and took the inside of the #24. Harvick also drove the advantage of the high side #24 and followed the #11 by. Hamlin and Harvick ran one and two for the checkers.

The racing doesn’t have too far to go for the next event. NASCAR Cup, Xfinity and Camping World Series all make their way to Martinsville for the next race weekend. Blue Emu / Call 811 weekend runs late in the day Thursday through Saturday to finish under the lights at the historic “paperclip”, celebrating 75 years of NASCAR at the track.

It was a Toyota day in California for the Auto Club 400.

A Toyota started on the pole with Matt Kenseth in the Dollar General #20. A Toyota won it with Kyle Busch in the Interstate Batteries #18.

Between these Toyota landmarks were 27 lead changes and 9 cautions. The final laps saw the caution that set in motion a green-white-checkered finish which also played out in the critical lead change.

It was Jimmie Johnson’s race to loose with a comfortable lead over team mate Jeff Gordon. Johnson’s tires, however, did not have the will to go on and the left front shredded under pressure. He managed to keep the #48 in a straight line and limped to the pits. END_OF_DOCUMENT_TOKEN_TO_BE_REPLACED

By now, it is quite publicly known that Denny Hamlin is in the garage for a while with a back injury. The injury resulted from the last lap wall crash following contact with Joey Logano in California.

Joe Gibbs Racing has announced the FedEx #11 Toyota will continue the schedule and be ready when Hamlin is released to race. In his absence, Mark Martin has been tagged to drive it.

Now, over at Michael Waltrip Racing, that leaves a little hole to fill for the #55. However, they seem to have some depth on the bench to run with until Martin can return.

Everyone at JGR, Denny Hamlin included, is pleased and excited to have Martin on board. His experience mixes well with the team of folks ready to race.

The coincidence, as it adds up, concerns car numbers… END_OF_DOCUMENT_TOKEN_TO_BE_REPLACED

Change. It is inevitable and often ironic. The calendar has changed to 2013 despite the best efforts by Mayans and “ancient aliens”. The wheel keeps turning. It’s round. That is its only real job, after all.

NASCAR, however, has thrown the wheels of change into a blender and hit the “All In” button. It wasn’t all “NASCAR”, per se, but the results leading to the first green flag of 2013 leave the previous season well in the shadows.

For instance, Brad Keselowski drives a Dodge with Penske Racing and Miller Lite to the championship. Fairly early in the 2012 season, Dodge introduced a 2013 version of the car. However, Dodge pulled their support for 2013 NASCAR as the “Chase” began to shape up. A Dodge wins the “Cup” and goes to moth balls. Ironic? Tragic? Economy of choice? END_OF_DOCUMENT_TOKEN_TO_BE_REPLACED 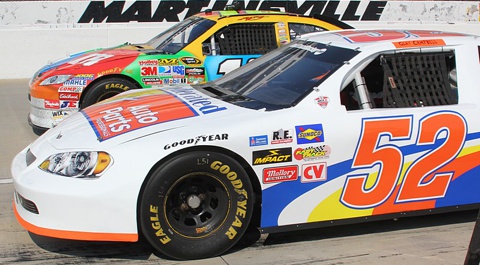 END_OF_DOCUMENT_TOKEN_TO_BE_REPLACED

Tires. Generally you think about your tires when the number on your inspection sticker and the number on your calendar matches up. It is then you take a quick look at the treads and think they will sneak by one more time or you realize they would hardly be safe hanging from a tree. If the latter is the case, you then mumble some profanity and begin the search for the best deal. Internet, newspaper, friends… Ads and questions… Buy three get one free… all weather or performance…  tread life… Do you want the replacement warranty?

Race drivers don’t have most of these worries. The tires they get are sanctioned so they aren’t shopping the net for the best deal. They do, however, find themselves at some facility testing those very tires that are issued for race day. In some ways you could equate this to comparison shopping as the drivers are out all day with tire stats instead of doing fun stuff at home. END_OF_DOCUMENT_TOKEN_TO_BE_REPLACED

These Germans have had a long history with Le Mans, including the pole and the win for 2011 at this race with their TDI R18. For 2012, they have taken the pole with a hybrid. A hybrid!! END_OF_DOCUMENT_TOKEN_TO_BE_REPLACED