Larger Than Little At Martinsville

Martinsville race week for the 2014 Goody’s Headache Relief Shot 500 has been one for many to remember for a very long time. There will be discussions and “I was there!” bragging rights over Dale Jr.’s win for quite a while. His drive to victory was a thing to see and generates yet another chapter for the historic little track in Martinsville.
Even more so when you consider all of the little bits that add the frosting to the victory cake. Dale Jr. grew up in the shadow of Martinsville grandfather clocks as his iconic father won there several times. He earned his first win of the CHASE playoffs after being eliminated from championship contention just one week before. He is a spokesman for Goody’s. He drives for Rick Hendrick which also owns the #24 car of Jeff Gordon, a main rival to his father. Hendrick suffered a deep loss of family and friends from an aircraft crash at Martinsville and a team victory helps ease the pain of returning. Dale Jr. lost his father at a race track. The little bits of history that create the foundations to generate more history are abundant.
Yet Dale Earnhardt, Jr. earning his first win at the little historic track is just another piece of the timeline for the smallest track in the CHASE.
The folks at Martinsville Speedway have never let the words “little” or “small” get in their way as they consistently weave big things into their racing events. The history of racing there and the grandstand view from practically every seat to see practically everything happen makes this place a favored fan destination. It is also a perfect setting to get fans involved in ways that larger facilities just can not do in the same way.
The October race put much of this in motion. Breast Cancer Awareness month was highlighted at every turn with the race curbing painted pink. The Chevrolet pace cars were pink. As part of this, Chevrolet partnered with the speedway and brought cancer survivors into the race experience with a special ride-along on the track following the VA Lottery Pole Day.

Race drivers Kasey Kahne, Martin Truex, Jr. and Ron Hornaday drove the pink Chevy pace cars and a Chevy pace truck with these special passengers hanging on for the ride. Surviving through the fight with cancer was certainly more difficult than taking turns at a race track with a NASCAR star but the smiles on their faces seemed to indicate this was much more fun.
The simple matter of size makes it much easier for fans to see on-track activity such as driver introductions, interviews and Grand Marshall Richard Petty. The compressed real estate of the track also contributed as it took little time away from tight schedules to help bring one young fan into the mix with driver Clint Bowyer.
At a pre-event sponsor dinner in Roanoke, VA a couple of weeks before the race, Bowyer happened to meet this young fan. Bowyer is a fun fellow. He doesn’t wear the NASCAR fame as an unapproachable shield. He jokes, he laughs, he smiles…  He jumps into the fan experience and has fun with it. It was evident on race day as he paused even moments before the race to pose with fans next to the #15 AAA Toyota. It was evident as he slid into the restaurant booth weeks before and just started having a one-on-one with this young man as if they had been friends that just happened to meet while being out.
The result was a coordination with speedway staff to get the boy and his family into the infield on race weekend, have a tour with Clint Bowyer that involved the #15 hauler, the garage and a sit down in the race car. It is a memory sure to linger well beyond the checkered flag. 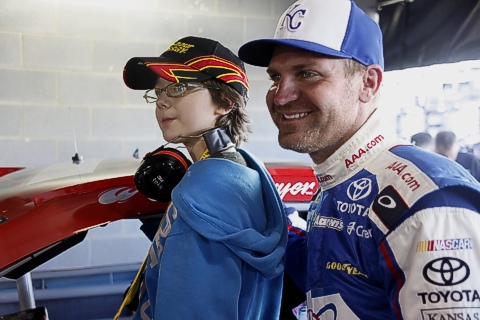 Bowyer later challenged for the Goody’s Headache Relief Shot 500, led several laps and finished in the top 10 at 7th place. It is very likely there was a young fan in the stands with an autographed #15 hat cheering him on.
These are small pieces of what makes Martinsville Speedway special for so many people. The views, the people, the memories…  It is the small track with big things woven into the fabric of its history for so many. It is why racing here is a highlight for drivers and fans.
Dale Earnhardt, Jr., some very special survivors and a young race fan have their memories. 95,000 fans on that race day have their own stories to share about “being there when Dale Jr. won” and the folks at Martinsville Speedway are cleaning up and starting the cycle all over again for racing in 2015.

Yet that is exactly what they do at NASCAR in the Camping World Truck Series. They drive hundreds of laps in what is essentially a box in front of another box. It is not that the racing is compromised. In fact, the truck series offers close and exciting racing. END_OF_DOCUMENT_TOKEN_TO_BE_REPLACED