Wow. That about sums it up.

Daytona with rain and a very late start was, from all accounts I’ve seen this morning, Dale Earnhardt, Jr.’s race from the start shortly before midnight.

His win was overshadowed (Junior himself was shaken and concerned) by the scene in his rear view. Pushing at speed and close quarter racing put the #11 of Denny Hamlin sideways on the apron as the #24 of Jeff Gordon and #3 of Austin Dillon went loose and essentially launched the #3 off the cars in front (#11 & #24) , tossed like a volleyball by the car behind (#15 Clint Bowyer),  and went high into the turbulent air over the field.

Dillon was simply along for the ride as the field went by underneath the #3. The Daytona catch fence separating the race track from the grandstands caught the #3 with a sudden stop ripping the heavy chain link and shearing much of the car into shattered debris. What was left fell back out on the speedway sliding and spinning on the top as the #2 of Brad Keselowski, in a sideways spin, caught the #3 again sending it spinning with another jolt.

Teams from several cars ran out to the wreck. The seconds passed with molasses but one by one the thumbs were up signalling, amazingly… stunningly… thankfully…, that Austin Dillon was not only alive but seemingly OK and responsive.

Dillon was checked over at the infield medical center and released with a bruised tailbone and arm. Other bruises will likely reveal themselves over this week. The next race at Kentucky might be just a little uncomfortable…

Other drivers expressed their relief, and thankful amazement, that Dillon was OK. Some praised the safety advances that NASCAR and tracks have made. Some others mentioned concerns over the speeds in these situations in which airflow and circumstance can still lift a car.

All were concerned for the fans. No major injuries were reported from the grandstands but five were treated in the infield while one was was treated and released from an offtrack hospital.

The question remains for NASCAR… Where is the line that separates a fan-inspiring show from driver and fan safety? It is a difficult equation. For Austin Dillon, the other drivers and a dozen fans at Daytona, the sum of that equation, thankfully for now, came out OK. The variables remain and, hopefully, safety will always be the constant. 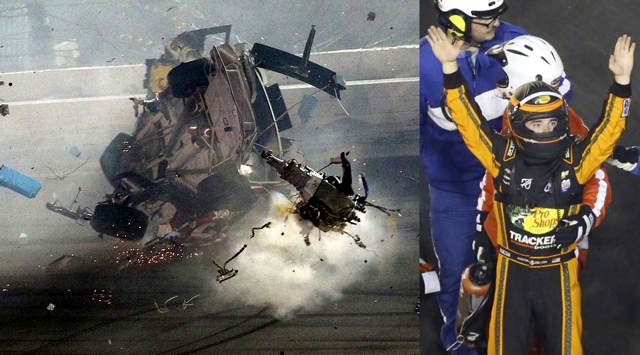 Dale Earnhardt, Jr. won the Coke Zero 400 at Daytona. Austin Dillon, however, won the standing ovation as he raised both arms outside of the shattered #3…