History And Racing – Maserati At VIR

Maserati. There is a colorful history to the name assigned to some very beautiful automobiles. There is engineering. There is luxury. There is prestige. There is racing.
It is the racing, and the history, which was the focus at Virginia International Raceway with the Maserati Trofero MC racing series. The racing was fierce. The history was iconic. It was all brought together as part of the TUDOR Sports Car Championship over the weekend of August 22-24. 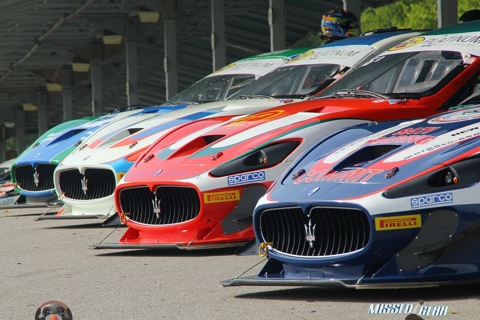 Virginia International Raceway has been referred to as a Heaven on Earth by Paul Newman. Neil Young sought out the facility for some testing of a converted hybrid 1959 Lincoln Continental convertible. Patrick Dempsey has been racing here with Grand-Am and currently, as recent as this same weekend, with the TUDOR Sports Car Championship. The three stars of the original Top Gear UK, Jeremy Clarkson, Richard Hammond and James May, have visited VIR as a playground for any auto enthusiast. The stars of NASCAR regularly test here.
Perhaps, for racing and automotive history, one of the most famous names to roll through the hillside at VIR is Carroll Shelby. Not only did he visit and drive here but he also won here. It wasn’t just any win, either. It was the win of the opening feature race of the new track in August of 1957.

Now…. Guess what he was driving. Go ahead…. Guess…
Did you say “Maserati”…? Good for you! In fact, it was a Maserati 450S.
Now, here we are in August of 2014. 57 years since Carroll Shelby drove a Maserati to victory at the inaugural race and the track is filled from the Oak Tree turn to the roller coaster to the esses with the roar of Maserati Trofero.
This was truly a special visit by Maserati. Not only was it 57 years since Shelby won in a 450S in 1957 it was also the only North American race of Maserati Trofero. The only one. The previous race was at Silverstone in the UK. Before that they ran at Spa in Belgium and their next races are in China and Abu Dhabi. In that mix they packed and shipped 20+ GranTurismo Trofeo MC racing cars to the United States as drivers and technicians flew over to drive and maintain. Imagine the logistics! All of that, and more, to drive and race on a hillside between Danville and South Boston in Virginia.
I spoke to some of the drivers. After all, here was an opportunity to get a world view of a racetrack I have been to many times. I know the American opinion from movie stars, drivers and historic automotive icons. The American opinion is that Virginia International Raceway is a beauty, a beast, a fun and unique rolling bit of payment tied to USA racing history. The European opinion…? They loved it.
The technical aspect of driving the terrain, the long straight into downhill twists, the hard “U” turn off the front stretch, the uphill esses, the speeds… I definitely was left with the impression they truly enjoyed racing there. Most of these opinions were pulled from comments with passing drivers in and out of the Masi paddock and showcase area and some of the folks directly involved with the event. It was confirmed, however, through a discussion over breakfast with drivers Barrie Baxter and Michael Cullen. Michael reflected on the track following the lay of the land rather than changing the grade to match a track design. He liked the speed and the challenging turn sections. Barrie was in awe of the countryside setting with the trees, the views and technical strip of raceway pavement as it tied it all together. He said, from the driver’s seat, VIR compared highly to European styles of racing.
The respect and reputation is well deserved at VIR and the opinions from drivers’ first visits with Maserati certainly adds to the adoration.
The weekend at Virginia International Raceway was full of racing tied to the TUDOR Sports Car Championship. The badges represented were simply amazing. Porsche, BMW, Ferrari, Aston Martin, Lamborghini, Audi, Ford, Chevy, Mazda, Nissan, Honda, Hyundai and yes, Maserati.
It was Maserati, for this visit to VIR, which made this weekend shine. I am always amazed at the little things that come around that turn out to be something special. During a previous visit I learned that the Folks at VIR were asked by Maserati of North America about agencies or contacts who might be able to help locate local hostesses for the drivers and guest area for the Trofero events. As it turns out, I did. I photograph a lot of racing but also have some connection with fashion and model photography. Through this I was able to put some well-spoken, intelligent and attractive women in touch and trackside with Maserati of North America / Maserati Trofero. Marcella Smith and Sarah Aesy were there to welcome, assist and direct visitors inside the Maserati guest pavilion. It was a pleasure to be able to be involved in this way with such a prestigious company and a very pleasant group of people. 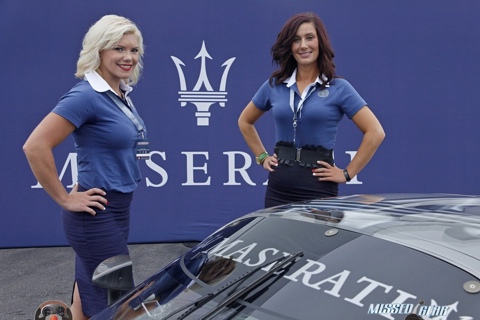 The weekend proved to be very enjoyable. The racing was fast, close and always fan friendly. This particular event at Virginia International Raceway will always stand out because of this connection, brief as it may be, with the fine people we met with Maserati.
Jesenia, Olaf… I Thank You. Especially as, quite likely, I made a nuisance of myself with that extra visit for the hand-carved steak lunch…. and air conditioning… and Perrier…
…and Thank You, Barrie. Saturday night at Oak Tree Tavern… I think that is all that needs to be said…