Martinsville has always held a bit of a temper. Most of the time, it stays in check as “just racin'” but sometimes…

Such was the case for the Kroger 200 (Camping World Series Trucks). Late in the race the Bass Pro Shops #3 of Ty Dillon got into the Anderson’s Maple Syrup – Kroger #14 of Kevin Harvick.

After they were able to move, Harvick began tapping and bumping the #3, moved around Dillon but only to jump and brake towards pit road. END_OF_DOCUMENT_TOKEN_TO_BE_REPLACED

It certainly sounds normal. After all, trucks have been running rally and off-road in all sorts of competition. This time was a bit different…

These trucks don’t have long travel suspension or skid plates. These aren’t the trucks from the Lucas Oil Off Road Racing Series . These are NASCAR chassis sanctioned for Daytona and Dover, Martinsville and Michigan. These are the Camping World Series trucks and they ran on dirt at Eldora in Ohio.

Tony Stewart (Sprint Cup Champion / Stewart-Haas Racing) owns the facilities at Eldora and worked with NASCAR to bring the trucks to town. The only real mod on the trucks from their last race at Iowa were box-grooved tires. The surface of the track is hard-pack clay, dimpled a bit with special equipment and periodically moistened and re-set.

The combination made for a slick return to dirt track racing for a NASCAR premiere series. The first since 1970 when Richard Petty won at the fairgrounds in Raleigh, NC. END_OF_DOCUMENT_TOKEN_TO_BE_REPLACED

Yet that is exactly what they do at NASCAR in the Camping World Truck Series. They drive hundreds of laps in what is essentially a box in front of another box. It is not that the racing is compromised. In fact, the truck series offers close and exciting racing. END_OF_DOCUMENT_TOKEN_TO_BE_REPLACED

As the “Chase” makes the way back to our part of the world it is only fitting we make one step back and have a look at the other series running in our back yard.

Camping World Series trucks are on tap at Martinsville Speedway coupled with the TUMS Fast Relief 500 for the Sprint Cup.

To be honest, years ago, when they introduced trucks to the NASCAR format we thought they were a bit daft. Trucks pull trailers and haul bricks or lumber or dirt or empty beer cans.

Trucks are torque machines for pulling and hauling. Speed is not generally the way they do things.

However, NASCAR has done a number with the Camping World Series. They took the Cup chassis and essentially dropped a truck on it. The hood is lowered and the windshield is swept a bit and the bed is not really a bed but it works. They are fast. They look like pick-up trucks. 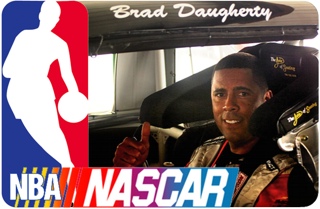