What Speed Through Yonder Bumper Brings

“What speed through yonder bumper brings?”

“To draft, or not to draft, that is the question”

“To push, perchance to pass —ay, there’s the rub:
For in that draft of speed what dreams may come,
When we have shuffled with this slipstream toil,
Must give us the pass—there’s the respect.”

Yes. I’m playing with, what some would say are sacred, words in order to illustrate how NASCAR plays with rules changes. It also makes a point that your average NASCAR fan knows as much about the “rules” as they do the works of William Shakespeare. Ultimately, rules don’t drive the fans. It is the speed and the drama of the race. How well the rulers of NASCAR can create a dynamic race and fan experience is, as Shakespeare wrote, “the rub”.

The 2012 season opens with fuel injected engines, for one thing. (Alas, poor Holley, we knew him…) EFI is not a bad thing. Perhaps even overdue. However, what is yet to be seen is team access to electronic data that computer controlled fuel flow can generate. The advantages of injection with balanced fuel flow, or even targeted fuel flow, have been noted in other racing series so it was coming to NASCAR regardless. It also makes sense as the “showroom” versions of all of these cars are injected so we might gain some crossover benefit. (perchance to dream). 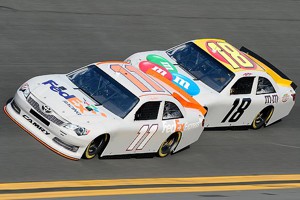 The Daytona winter testing just completed before the February crank-up to the “500”. Beyond Danica Patrick’s arrival in the Stewart-Haas, GoDaddy #10 Chevy, the top talk was on the two-car draft. It seems the fans don’t really like it and NASCAR is trying to fiddle with restrictor plates, grill openings, radiator cap pressure, etc. to find ways to make pack cars run with similar speed. Drafting is, and always will be, a part of racing. Two or more cars are going to run faster. The balance, of course, is the heat that builds quickly in the cars following (pushing) the leader as the air flow to the grill is severely diminished.

With draft speeds as high as 206+ mph and single speeds hovering around the 200 mark over 3 days of testing, NASCAR officials seem to think they have some data to pour over before February. The teams and drivers were cooperative enough in running what NASCAR wanted and feeding information back.

Change is necessary. Spoilers, fins, fuel injection, body design… Whatever. These changes will dictate how NASCAR “say” the drivers “should” run on race day. NASCAR can do all the rules changes but on “race day” it will be the drivers that determine what tactics are needed to take their sponsors to victory lane. The race, after all, is not scripted like a Shakespearean play. On February 26th, we’ll see if two car drafting survives for yet another Daytona 500.

2 thoughts on “What Speed Through Yonder Bumper Brings”