NASCAR is On Tap for Budweiser at Daytona

The Budweiser Shootout is on at Daytona. The speed sprint to showcase the new NASCAR season before the points count at the Daytona 500 is on with some new cars (notebaly to the front re-design), some new colors (the 2011 schemes are sharp) and some sponsor change-ups. 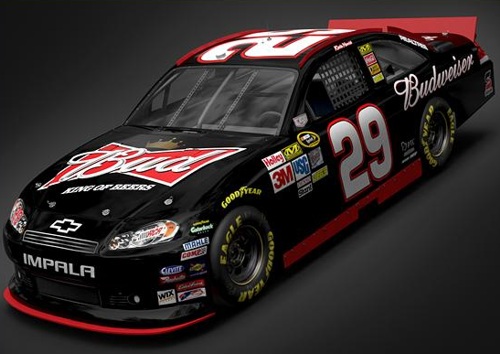 Possibly most noteable is the move of Budweiser from Kasey Kahne to the 29 of Kevin Harvick. Harvick is a good fit for Bud. He is respected among the drivers and generally well-liked in the grandstands.

Jeff Gordon is no longer carrying the DuPont colors but will have AARP and the “Drive to End Hunger” on the 24 Chevy for a bulk of the 2011 races.

Kasey Kahne is running with Red Bull Racing, for this season anyway, before making another move in 2012 to Hendrick where he is slated to take the #5. Look for Kahne in the #4 with Red Bull this year.

However, don’t look for these changes at nascar.com. It may be fixed before the Daytona 500 but as of this writing, NASCAR has not corrected the drivers or team colors on their website. Odd, as many of these changes were announced as early as May of 2010!

As for the Bud Shootout – there are currently 20 laps to go. 14 cars remain.  Junior is out. Kyle Busch is out. Mark Martin is out. Two car hookups are the rule for the night.

The first 25 lap segment was uneventful as drivers hooked up and tested the cars and the track at speeds over 200 mph. The second 50 lap segment brought out tangles and touches and the yellow to put several in the garage. The remaining 14 are currently pushing it 2×2 around Daytona to chase the top spot.  Jimmie Johnson started in the back  and has pushed or pulled to the front of the pack. Will the #48 roll out? Will Harvick take the new Bud #29 over the line for three in a row?

Too many questions – I’m going to watch!