It’s just down the road and many don’t know it is there. Some very famous people have visited and praise it. It is Virginia International Raceway.
This year alone the most famous badges from iconic motorsports have turned laps. Exotic sports cars to American muscle…  VIR is a showcase of motorsport.
Yet many still raise a question over what and where it is. Like its more famous racing cousin up the road in Martinsville, there is history. Martinsville has names like Richard Petty and Dale Earnhardt. VIR has names like Carroll Shelby and Paul Newman. Also, like the NASCAR icon, there is racing this weekend. 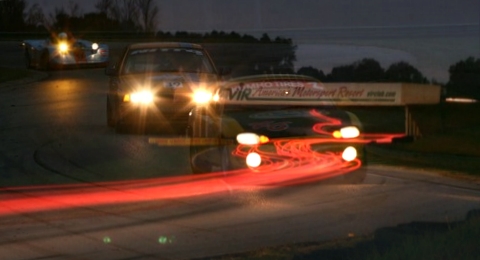 While Martinsville is hosting the Sprint Cup and the CHASE for the championship VIR will be hosting a 13 hour enduro known as the Charge Of The Headlight Brigade.. You may not recognize the drivers but that does not change the challenge or excitement of racing from the morning well into the night.
The field of cars is wide open with variety and intensity. The SCCA drivers and teams are all there for one thing. They want to survive the long day and go for a win.
Yes, it is real racing. The course is open and rolling and with Autumn colors coming into play the backdrop will be spectacular. The racing at VIR is set to start off the grid at 9:00AM Saturday and the checkered flag will fly at 10:00PM.
It is even possible to catch action at VIR, roll up the road and check out the NASCAR trucks at Martinsville and be back at VIR for many more hours of racing into the night. Plus, you still have the CHASE to catch back at Martinsville for Sunday.
Virginia International Raceway is located just East of Danville. Is it worth it?
Yes.