Rockin’, Racin’ and Raising some Cash

Martinsville Speedway hosts the Goody’s Fast Pain Relief 500 and as such is a focal point of Southwest, Central and Southside Virginia. Radio station WROV in Roanoke is no stranger to the racing at Martinsville and packs up the broadcast to go racing with the fans. This time, however, the staff at the station had an agenda. It started with a guitar and a plan to raise some funds for the wife of a local musician. Tricia Scott, wife of Kelly Scott, is being treated for breast cancer and the costs are rising placing an added hardship on the family in these already difficult times.

The radio station has already teamed up with a local venue (Martin’s in Roanoke) to hold a benefit concert with a number of local bands and musicians that have been directly impacted by Kelly Scott’s generosity and talent. The staff at 96.3 WROV were already headed to the track so the guitar came along. A mass email to NASCAR drivers’ teams told them of the benefit and the cause. They responded and were ready to autograph the guitar to be used as the prize in a raffle to raise more money for the family. 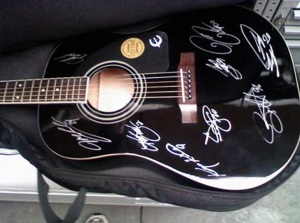 According to the staff at WROV, almost all the teams responded with willingness to sign but as is the case in a timed setting, getting around to everyone proved problematic. Schedules and conflicts kept the staff from a lofty goal of “everyone” and it soon became obvious it would have to be “everyone we can get”.
The WROV folks relied heavily on the kindness and cooperation of Mike Smith and Clay Campbell of Martinsville Speedway for their assistance in getting around as many drivers as possible. At the end of the day, or just before green flag for the Goody’s race on March 29, the radio staff had collected about a dozen or more signatures.
Steve Cannon of WROV said “The team response was fantatstic from the drivers. I wish I had the opportunity to meet and thank every one of them. Unfortunately, our schedule and theirs did not always match up on race weekend.”
The guitar will be set up for local contesting through a raffle with all the proceeds going to the Scott family.