Qualifying for the Daytona 500 has taken a turn for the strange. Most of the drivers, if they understood the point of it, were not pleased with it.

I’m not going to even try to explain it. There were groups that had a limited time to roll laps and get times. Drivers tried to play the system with some kind of “who’s on first” strategy.

I think it is supposed to be more fun to watch. It wasn’t. It was kind of like the hype and expectation for the “50 Shades Of Grey” movie which was released the same weekend as Daytona 500 qualifying. From what I’ve read the movie was less than expected…

So was Daytona qualifying…

I don’t know exactly how but Jeff Gordon is on the pole. Jimmie Johnson is beside him. The rest of the field race in during the Budweiser Duels later this week. There should be a little more to watch for the “Duels”.

Until then, ponder this…  How many shades of grey are there on the track at Daytona from pit road to the checkered flag…? Hmmmmmmm….? 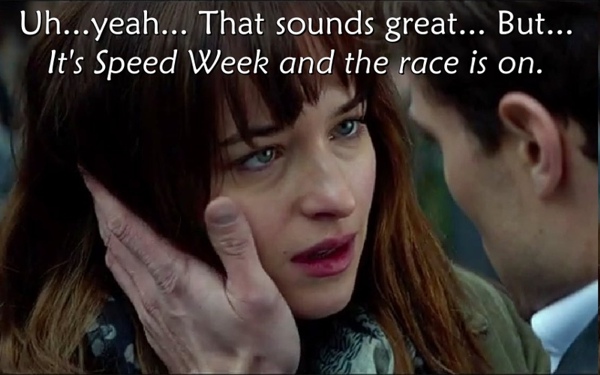 Well now… That’s an interesting thing. Jeff Gordon, who has announced his retirement following this season, has landed the pole for his final Daytona 500. Despite the weird qualifying with the cat and mouse wait and see and go style Gordon and the #24 rolled on with Johnson in the #48 to go for spots 1 and 2 for the opening points race of the season.
The “500” has seen interesting starts in recent years. Gordon announces retirement and is on pole for 2015. In 2014 the #3 is back with Austin Dillon and he grabs the pole. In 2013 Danica Patrick takes the pole for her first full time season. Interesting.
The 2015 season is officially one week away but we still have the Budweiser Duels Thursday evening to set the rest of the field. Let’s go!

The Sprint Unlimited. It opens the NASCAR season and opens the door into a view, even if just a glimpse, of where stock car racing used to be. The “Unlimited” is a race to the finish for a win and a purse which, compared to current season points racing, leaves little regard to the method of getting there. It is closer to racing the way it used to be.
Show up with a car. Race, push, pass, shove… Get to the front… Make the checkers… The mirror is for looking at the loosers and maybe, just maybe, to see if the car you scraped is making a run for your bumper.
Modern points racing throws more into the mix. The rules of play have been turned into a joyous read for attorneys which outline every detail down to the fraction of the inch and the micro weight of a push rod. The driving has become a strategic play of fuel, tires and protection of the aerodynamics. The show has become homegenized for mass consumption and in doing so has left some of the soul in the garage.
Sounds a bit harsh…  Rewind.
The Sprint Unlimited did not disappoint in terms of drama. There was a lot of speed, lots of crashes, near misses and a restart shuffle that put Matt Kenseth on the checkers. There was even a fight… Sort of.
In the midst of Speed Week, Fox Sports has shown a documentary showcasing the 1979 Daytona 500. It was mix of personality and luck that introduced NASCAR racing to a large portion of the country that had largely ignored it. It was a reach forward to show the unitiated what the sport was all about. It was a move to show the respected masses that rednecks and grease monkeys can fit into the wide world of sports.
It worked. Speed, crashes, drama…  There was even a fight. The sport was given a kick of horsepower into the public eye and it took hold and grew.
Times, however, change. People begin to talk about safety, fairness, sportsmanship, waste. At the height of this growth, the same race that spawned it put the breaks on with the death of one of the most popular drivers on the track during the race. The world of NASCAR, and auto racing in general, was thrust into a microscope of detail over driver safety. Other events threw safety back at pit wall. Later, profile deaths in other racing series brought more focus to safety. Car design, seat and harness design, helmets, driving suits, fuel tanks, engines, aerodynamics… It all changed.
It changed to the point the only difference between the cars was a manufacturer sticker and the color. It changed into a race of technique behind the wheel and finesse of strategy. It became, to be honest, a little boring. Fan attendance and attention began to waver.
The question to retain fun and excitement for the fan while keeping the drivers safe has continued to change the sport to the current season. The cars have been changed. The format has changed. From qualifying to the points system to the garage and pit road the sport has become a river of change. The fight to keep the track safe while also maintaining the fans has become a tightrope of balance.
There are those who remember “the good ole’ days” and say it has been ruined and lost forever. However, it is also important to note the sport, as it was with that first green to checkered airing of the Daytona 500, still exists in much the same way. Advances of machinery and safety aside, the racing is much as it was and has been. To find it all you need to do is pack for the short drive to your local weekender race track where the drivers still have day jobs and the cars are built in the garage across the street.
NASCAR, Sprint, Xfinity and Camping World are the higher levels of the sport and with it come the stardom, fame and draw of the big ticket that only comes around in person, at best, one or two times a year. The organizers are constantly in a state of finding what they need to keep that show worthy of the hype. Sometimes they miss the mark and sometimes they hit a winning combination. With the world we live in and what they offer within the rules they have to operate in it is doubtful, criticize all you want, they could do much better. Give them a huge nod for continuing to look and find ways to involve you in the process.
For those who do criticize and moan and say it is done and over I would say this. Pick yourself up and go to that track down the road. There are racetracks all over struggling to fill seats with cheap tickets and great racing that is, as much as is possible, as it was. It is where it all started and your support can keep it that way. Go when “Cup” is in the area to see your big stars but if you yearn for the “good ole’ days” of racing go to the next weekend show at your local small track.
Get the best of what was and what is. Quit your bitchin’ and go racin’!